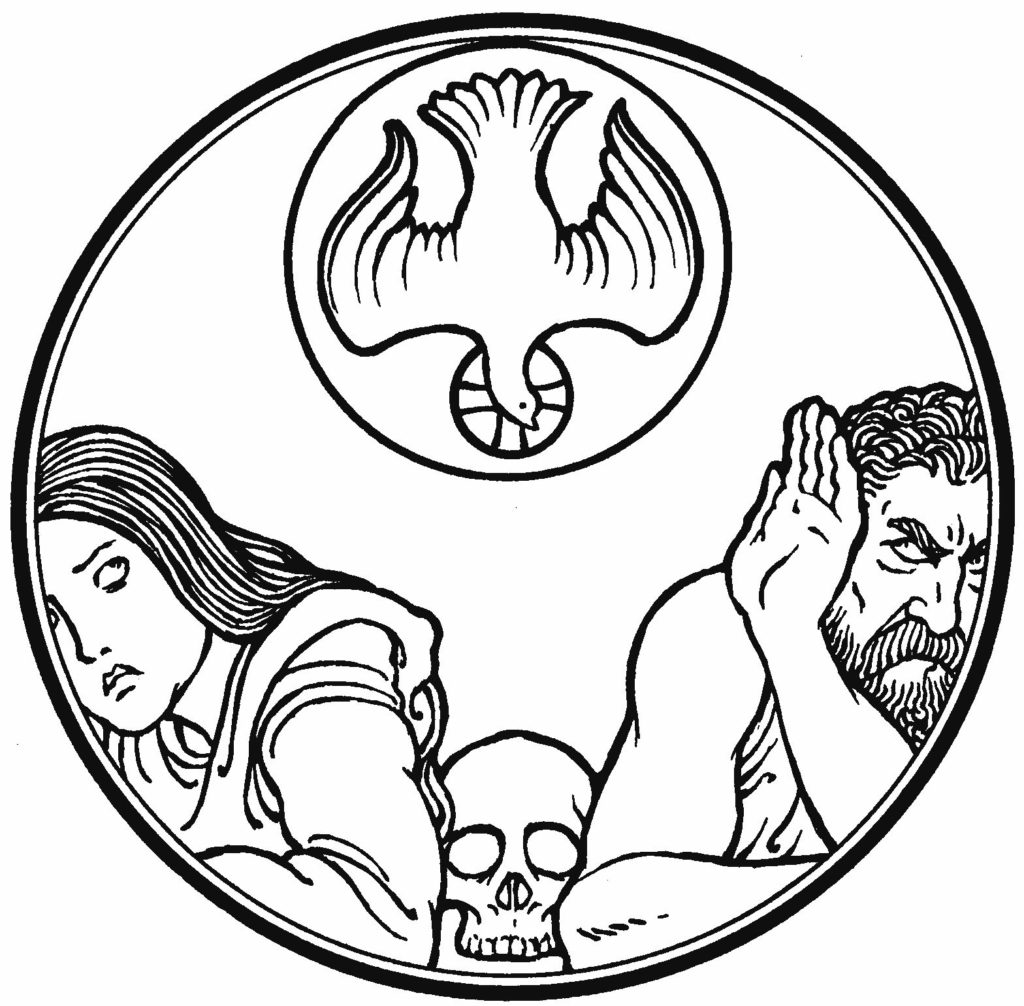 He is out of His mind, you know.

More than that, He has no idea what He is doing.

He says He wants the very best for you,

But that can’t be true.

He barely knows you.

So, let’s do it differently.

Let’s do it our own way.

Let’s eat what we want.

Let’s do what we want.

Let’s be who we want.

It would be crazy not to.

That simple lie was all it took to divide the first household.

And since a house divided can’t stand,

That was all it took to make the very first house fall down.

Of course, it wasn’t just the house on 1 Eden St.

It was the whole garden;

And all their pets;

And all their children not yet born.

God made a beautiful home for us.

But when sin came into that home,

When it divided us from each other and from our God,

When that house fell down,

A new house sprang up.

And a strong man stood vigil over it.

Satan, the prince of this world,

The master of this demented household,

Plopped an easy chair in front of the door,

And sat down to keep watch over his stolen goods, to guard his house.

The move from the Garden of Eden to the Land of Nod was not a step up.

It was hunger, and hurt.

It was pain and labor.

But their new home was more like a nightmare.

And it made them crazy.

Satan’s offer seemed so sane, and so reasonable.

More than that it was practical:

To do what we want;

To eat what seems best to us;

All that serves the greatest good: namely, our own.

And what could be crazy about that?

It’s infected everyone– this madness.

This thing called sin, that turns the world upside down;

And it is so powerful, that in the Gospel text you just heard,

It’s even getting the best of Jesus’ own family.

They love Him, but it seems that He is taking things too far.

And so they came to seize Him, for they were saying, “He is out of His mind.”

So far in Mark’s Gospel, “out of His mind” looks like…

And that’s just chapters one, two, and three.

Jesus is really just getting started.

So, you might understand why the family wants to come grab Him by the ear,

And make Him go take a nap.

At least, I think you would understand.

Because so much of the time, even to you who know Him best, even to His family,

Jesus appears to be “out of His mind.”

Love those who hate me? He’s out of His mind.

Picky up my cross and follow Him? He’s out of His mind.

Get married before having sex? He’s out of His mind.

Come to church every Sunday? He’s out of His mind.

I know, you would never say that out loud.

Our actions, and our inactions – They speak loudly enough.

Even if our lips don’t say it,

Our hearts and hands shout aloud:

The brilliant author and apologist, C.S. Lewis, offered that as a possibility once.

Jesus can be either

The Resurrection, of course, is proof that the answer is c).

The thing is, though, that all by itself, that is not really Good News.

The Good News for youis that there’s some crazy in there, too.

God Himself taking on flesh and being born of a Virgin,

In the backwaters of the Roman Empire.

Making Himself a descendent of Eve,

Coming in weakness to crush the Serpent’s head just as He said.

Jesus going to the cross for you,

And dying for stuff He never did wrong, for your stuff.

But in weakness, in death, and in sacrifice,

Jesus is the Stronger Man.

And He has broken into the strong man’s house,

He has bound him in chains, and plundered His goods.

With pierced hands, He has snatched you away.

And so He has taken you home again, to a House undivided,

Even into His own Body, the Church.

The Gospel is crazy.

Eating and drinking the Body and Blood of Christ in the Eucharist,

And believing that there our sins are forgiven, just because He said so:

Trusting that Jesus actually does what He says in Baptism,

That He names you and claims you and makes you His own;

And then that He would put that Gospel into your hands,

He must be out of His mind.

Still, you should be patient with them.

By grace, you are those who do the will of God.

By grace, you’re out of your mind, too.

If it still seems strange to talk this way, listen to St. Paul.

Just a chapter after the epistle you just heard, He writes this to the Church in Corinth:

For if we are beside ourselves

That word is the same one used in the Gospel. So its really more like:

For you, Jesus is absolutely out of His mind.

But He knows exactly what He’s doing.

And He really does want the very best for you.

It must be true.

It must be true, Because He knows you

And more than that, He’s joined Himself to you.

There, in the font, where He made you His true brothers and sisters,

So, let’s do it differently.

Let’s do everything Jesus’ way.

Let’s eat whatever He feeds us.

Let’s do whatever He wants.

Because anything less than that would be utterly and tragically sane.

So when it comes down to it: