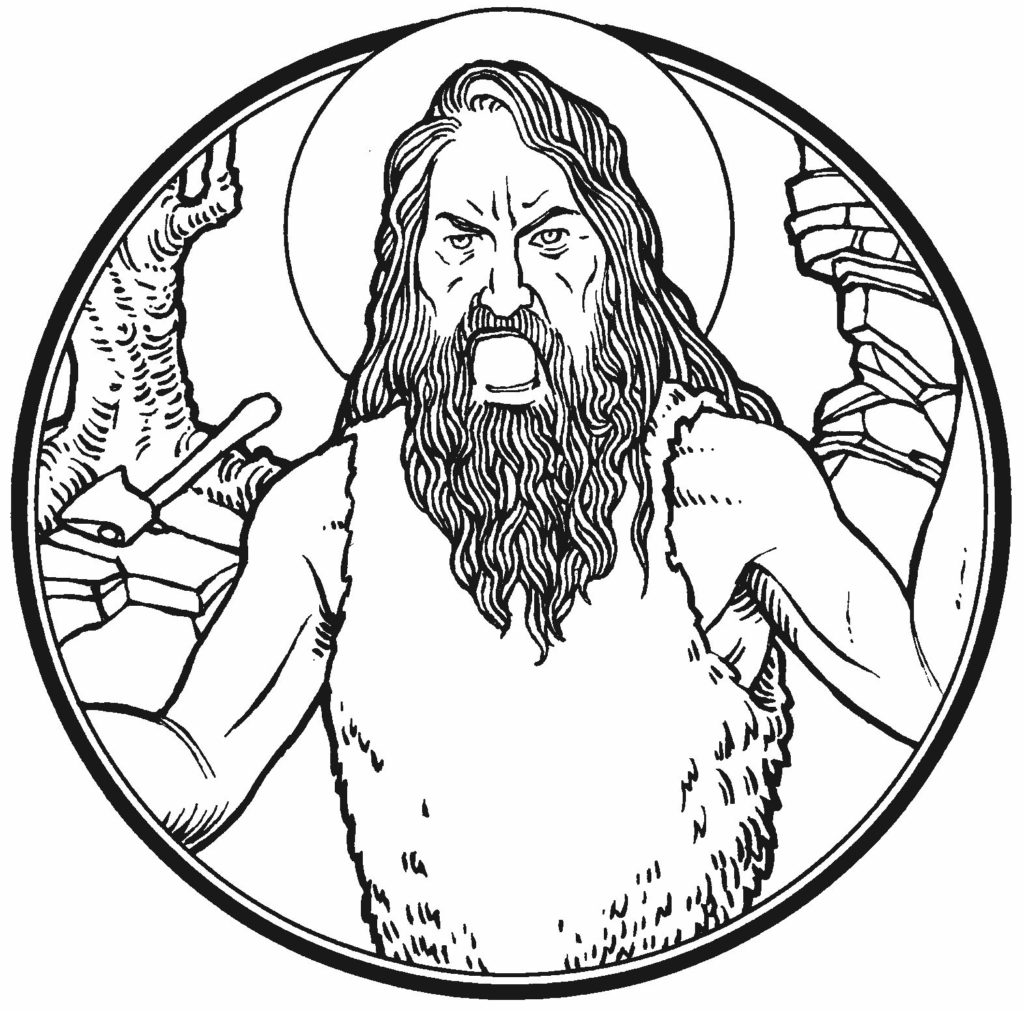 A week or so ago I made the observation that for all our celebration of John the Baptist in general and of his preaching imparticular,

We don’t really love him or desire him and his proclamation.

To put a fine point on it,

I opined that if John were preaching from a pulpit today,

No congregation would flock to the wilderness to hear him.

And if he appeared and spoke, they would run him out of town.

Maybe he’d last a couple weeks on sheer charisma, but to be sure,

John would be out of his call and bagging groceries at Wal-Mart before Christmas.

After ascending to the pulpit with bugs in his teeth and scolding you saying,

“Blessed Advent, you brood of vipers!”
“Who warned you to flee from the wrath to come?”[,]

We’d gossip about him at LWML meetings;

Two weeks of that, and John would be out of a job.

In either case, a third and fourth read have led me to consider something else.

After all, if we mean what we say in the Creed,

That we believe in one Holy, catholic and Apostolic Church,

Then the big difference isn’t between the Church then and the Church now.

It is one Church after all, and so we all must hear God’s Law and Gospel the same.

Instead, it seems, that the preaching of John in Advent invites a different contrast;

Not one that divides the Church against herself,

But a contrast that distinguishes the Church from everything and everyone else.

“In the fifteenth year of the reign of Tiberius Ceasar,

Pontius Pilate being governor of Judea,

And Herod being tetrarch of Galilee,

And his brother Philip tetrarch of the region of Ituraea,

And Trachonitis and Lysanias tetrarch of Abilene,

During the high priesthood of Annas and Caiaphas,

The Word of God came to John the son of Zechariah in the wilderness.”

I realize that sounds like a lot of proper nouns for a fill-in-the-blank pop-quiz.

But it isn’t that.

Luke isn’t merely telling us when and where the Word of God happened to John.

He is telling us where it didn’t happen.

The Word of God that came to John that Advent did not come to Caesar,

Or Pilate or Herod, or Philip or Caiaphas or any of the rest of them.

The Word of God did not come that Advent to the Temple;

Or to Abilene, or to Ituraea, or to Galilee, or to Judea – properly speaking.

To the kingdoms of this world.

Not to the department store,

Not to the radio,

Not to the White House,

Not to the State House.

The Word of God came that Advent to John the son of Zechariah in the wilderness.

That’s not where you would put a word you want people to hear.

Or maybe God knew that it was only in the wilderness that people could truly hear.

Many times when we say “The Word of God” we are speaking the way John does;

We’re talking about Christ; the eternal “Logos” which is also translated “Word.”

But that’s a sermon for everyone who makes it to Service on Christmas morning.

For now, that’s not the language Luke is using.

He doesn’t say here that the “Logos” Word of God came to John, as in “the Christ.”

He says the “rhema” word of God came to John.

God’s speech, His divine utterances, God’s own message and discourse came to John.

“And he went into all the region around the Jordan,

Proclaiming a baptism of repentance for the forgiveness of sins.

As it is written in the book of the words of Isaiah the prophet,

‘The voice of one crying in the wilderness:

Prepare the way of the Lord;

Every valley shall be filled,

And every mountain and hill shall be made low,

And the crooked shall become straight,

And the rough places shall become level ways,

And all flesh shall see the salvation of God.’”

The Word of God that came to John  was a call to repentance,

A real turning away from sin.

Here it’s good to remember that repentance is not the same thing as “contrition,”

I.e. feeling bad for your sins.

True repentance, the kind that brings about the forgiveness of sins,

As it was for Abraham, so it is for all of Abraham’s descendants,

That you trust in God, and it is credited to you as righteousness.

The Word of God that came to John says being Jewish is utterly meaningless.

Israel is full of rocks big and small.

And God can make sons for Abraham out of them that are as dead as their faith.

Sharp as it was, John did not wield the Word of God like a sword.

Chopping down every tree that would not bear fruit in keeping with repentance.

Every tree that does not bear fruit in keeping with faith is thrown into the fire.

That’s the difference between the Church and everyone else.

Christ is no consolation to Pilate or Herod,

Or to those who have no fear of what their sin and their sins have earned them.

Like the rest of the world, they will certainly enjoy a nice and gentle story told in hush tones at the annual winter festival.

But without repentance, the Child in the manger,

And that same Child all grown up will never sound like Good News,

Or draw them away from their kingdoms and into the wilderness.

Though I have just said everything John said,

And though I had some less than hopeful estimations last week,

I can’t help but notice that I’m still standing here.

You who have come to the wilderness to hear the Word of God that came to John,

Have not, in fact, thrown me out.

You haven’t ripped John’s preaching out of the Bible or out of your ears.

And you’ve returned to that baptism like all the people headed to the Jordan.

You who have two coats have put the other one in a box in the hallway.

Those of you in the finance world aren’t cheating your clients.

Folks in the military aren’t bullying people around.

And anyone who has done violence to another,

Or who has been busy gossiping and accusing,

Or who has been discontent with their wages,

Has said in his hear, “What shall I do?”

And according to the Word of God, have returned to their baptism in repentance.

You have heard the Word of God, through John and through me,

And in the most marvelous way, by God’s grace, you understand it in the way of v18.

“So, with many other exhortations, he preached the Good News to the people.”

You did not hear it and flee to the kingdoms of this world or to its rulers.

You heard it and fled to the wilderness, where the Word of God came to John;

Where the Word of God comes to you.

That is, the rhemaof God is preparing you to receive the LogosWord of God.

God’s speech has prepared you to receive God’s Son –

Not just at Christmas, but now today at Font, pulpit, and Altar.

The only one bearing good fruit has been cut down for you.

He is the One with two coats.

You were naked, and Jesus has clothed you in His baptism,

Sharing His mantle of righteousness with you.

Likewise He is the One with the feast,

Who has gone hungry that you may eat His Word and His Supper.

Not merely sharing with you a meal, but giving up for you His life and breath,

That you would be forgiven and live.

To those who would collect what is due them or more,

Jesus gives you what is due to Him.

He gives you His Advent and His Nativity.

He gives you His death and His Resurrection.

His Life and His Joy.

And it’s not even Christmas yet.