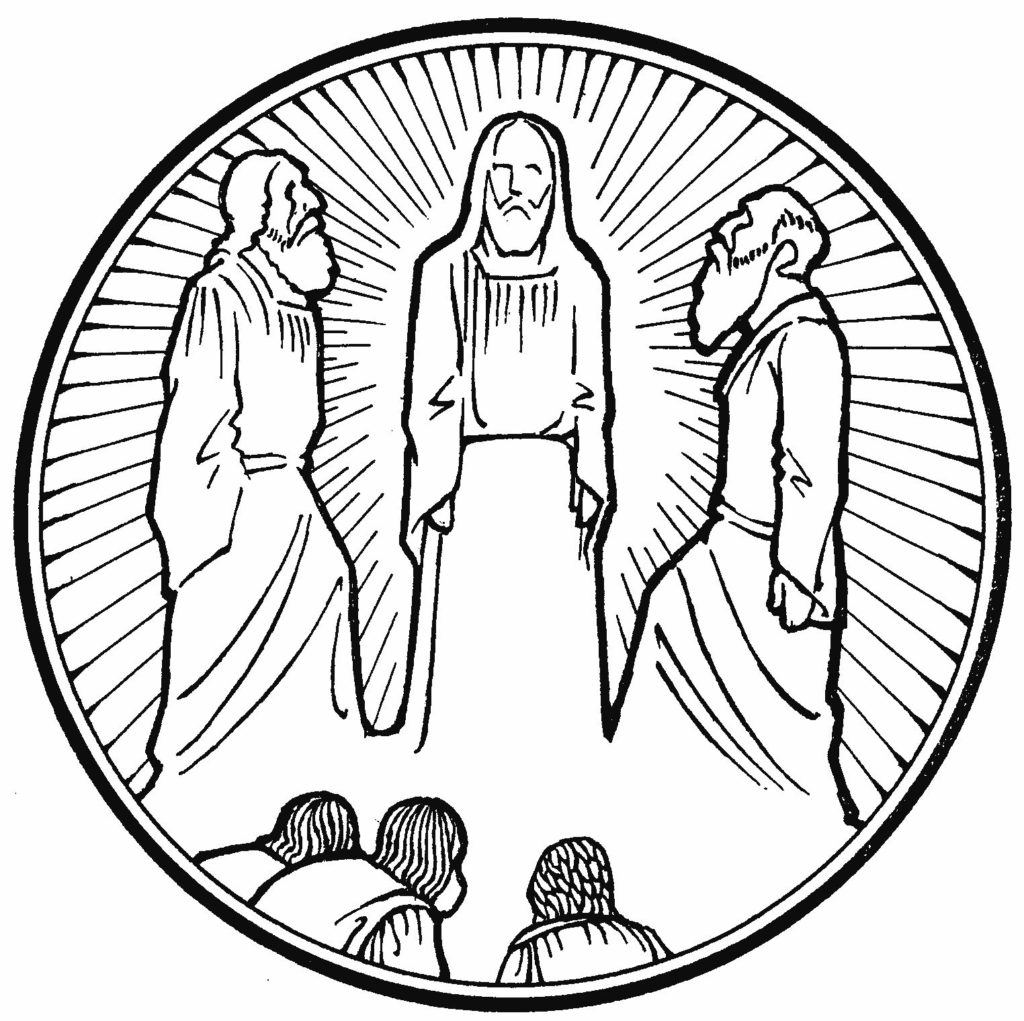 It was just a couple of Sundays back, hours after Ambrose’s baptism,

That I was laying on the couch in the living room.

After the morning’s events I was spent, exhausted, and completely passed out.

Or in the language of St. Luke in today’s Gospel, I was heavy with sleep.

It was at this vulnerable moment that Lucia and Christoph were standing over me.

They had positioned themselves on the arm of the sofa where I lay.

They were poised and ready to pounce when Lucia, the brains behind the operation said:

Hearing those words I shot up and opened my arms just in time to catch them.

If she hadn’t have given it away by coordinating with her brother,

It may not have gone so well for me.

But, as it is, she spoke her plan aloud, and I was saved.

Now, I told you that story to remind you of what you likely already know.

Dreams aside, you don’t really see in your sleep.

But you do hear.

That’s why you’ve all been woken by loud noises or even quiet ones.

And you need to keep that in mind to understand what’s happening this morning.

Jesus has taken His inner circle of disciples on the mountain to pray.

And while He is praying, He is transfigured.

As He prays, Jesus appears to be changed.

His face is different somehow; His clothing is like the sun;

Moses and Elijah show up, bathed in heavenly glory, and it is magnificent…(!)

But the disciples are heavy with sleep.

Because, as you know, you don’t see in your sleep.

And they would’ve napped right through Transfiguration Sunday,

Except someone spoke aloud the big plan.

And behold, two men were talking with Him, Moses and Elijah, who appeared in glory and spoke of His departure, which He was about to accomplish at Jerusalem.

That word, translated here as “departure” is a Hebrew term so important that it wasn’t even translated into Greek, perhaps out of fear that it would lose some of its significance.

Moses and Elijah spoke with Jesus about the exodus which He was about to accomplish at Jerusalem.

For Peter, James, and John, and for all of you, this should call to mind quite a bit:

The exodus from Egypt, the deliverance through the wilderness; the long journey to the Promised Land; and all of God’s mighty acts in history to save, rescue, and deliver His people.

This exodus is all of that and more.

More impressive than the fiery chariots that bore Elijah to heaven.

More powerful than the plagues and the parting of the Red Sea.

This is the greater exodus, the one that finally brings Moses into the Promised Land.

This is what Jesus is about to accomplish in Jerusalem.

Moses and Elijah, with Christ, in converse high, proclaim the Gospel.

It is Lent and Holy Week, and cross and passion,

It is Jesus’ life and death and resurrection, for them and for you.

This Gospel, this Word of God, awakens them from sleep.

This Gospel, this Word of God, has awoken you from sleep.

Of course, you don’t only see Jesus.

Though they have been awakened, Peter, James, and John are still in the flesh;

And so, like all of you, they struggle against it.

All of that might sound too abstract; so let’s be specific:

The disciples struggle with their flesh in general, but their eyes in specific.

After all, they’ve never used them before.

This is all brand new.

Moses and Elijah seem to shine as brightly as their Lord.

What they still do not see is that while Moses and Elijah shine in glory,

It is a reflected glory, like when the moon shines brightly.

The light is not its own, but comes from the Sun.

This is why they make the mistake of putting Jesus, Moses, and Elijah on the same level.

That’s what was happening when Peter suggested giving them each a tent to sleep in.

He didn’t mean to, or at least he wasn’t aware of what he was saying,

But it was a big mistake to put Moses and Elijah on the same level with Jesus.

There are so many wonderful things in this world.

They are things that God has made and redeemed.

And so they shine brightly; not with their own glory, but with Jesus’ reflected glory.

And it is no more sinful for you to behold them than it is for them to see Moses and Elijah.

Because you have been awakened, by Water and the Word, in Holy Baptism,

You can see all these things.

But because you still struggle with your flesh in general, and your eyes in specific,

You, like the disciples, are tempted to put those things on the same level as Christ.

You are tempted to give them the same share in your life.

I don’t think it would be fair to break down in terms of days and hours or dollars and cents;

The time and money you spend on this and that versus what is spent on your spiritual life.

But it is appropriate to speak in terms of trust.

It is as Luther says, whatever you put your trust in, that is your god.

Your Father in heaven knows this about you, of course.

He knows that you struggle with your flesh.

He knows that you are still learning to see;

And that this will go on your whole life-long.

Of course it would make sense for God to go to work on your eyes.

Instead, God goes to work on your ears. You see this with the disciples.

When the cloud overshadows them, they can’t see anymore.

Kind of like when they were asleep, they can only hear. And they hear one thing:

This is My Son, My Chosen One; listen to Him!

This is God’s constant correction;

That the same Word which woke you continues to guide and direct you.

This is the one Word that Moses and Elijah preached.

This is the one Word in which they hoped.

And like you, this is the one Word to which they listen.

It is a well-worn preaching cliche that the disciples tried to put up the tents because they wanted to stay on the mountain with Jesus;

The obvious application being that you want to stay on the Mount of Transfiguration with Jesus, who bids you instead go down the mountain and into Lent.

There’s plenty of truth in that, which is likely why it is such a popular sermon theme.

And yet, I can’t help but notice how unnecessary it is.

Yes, you do have to go down the mountain and up to Jerusalem to behold Jesus’ exodus.

But Lent is right before you – even nearer than Wednesday’s ashes.

Lent is right here in the cloud.

In this cloud all the things you think you see rightly are removed from your sight.

Because all those things are meaningless and dull unless they reflect Jesus’ glory.

Every word that Moses and Elijah preached would be folly apart from Christ.

They have no glory of their own.

How much more so for the things of this world?

As the cloud overshadows us, please don’t run away.

Let every distraction be cast aside and every idol cast down.

Let every ear be open to your heavenly Father, who says of His Son: “Listen to Him.”

And listen to Him.

Listen, and for a time, be still – even quiet.

Even the disciples kept silent and told no one in those days anything of what they had seen.

This doesn’t mean you can’t tell anyone about Jesus.

It means that listening must precede speaking; for you, too, are disciples, students of Jesus.

When the cloud is lifted, Jesus looks like Himself again; but He is no different.

Jesus was fully God and fully Man before the Transfiguration,

And Jesus is fully God and fully Man after the Transfiguration.

The change occurs in His disciples: Peter, James, John, and you.

Their eyes now see what their ears have heard.

Let it be so for you this Lent.

And let it be so for you now, as you approach His Holy Supper;

That you disciples, woken from sleep, and enlightened by God’s Word,

Would see on the altar everything Jesus says:

His Body and Blood, given and shed for you for the forgiveness of all your sins.

For as you eat and drink, you will not merely be changed.

You will be utterly transfigured.

To Christ be all the glory. Now and forever, and unto the ages of ages. Amen.