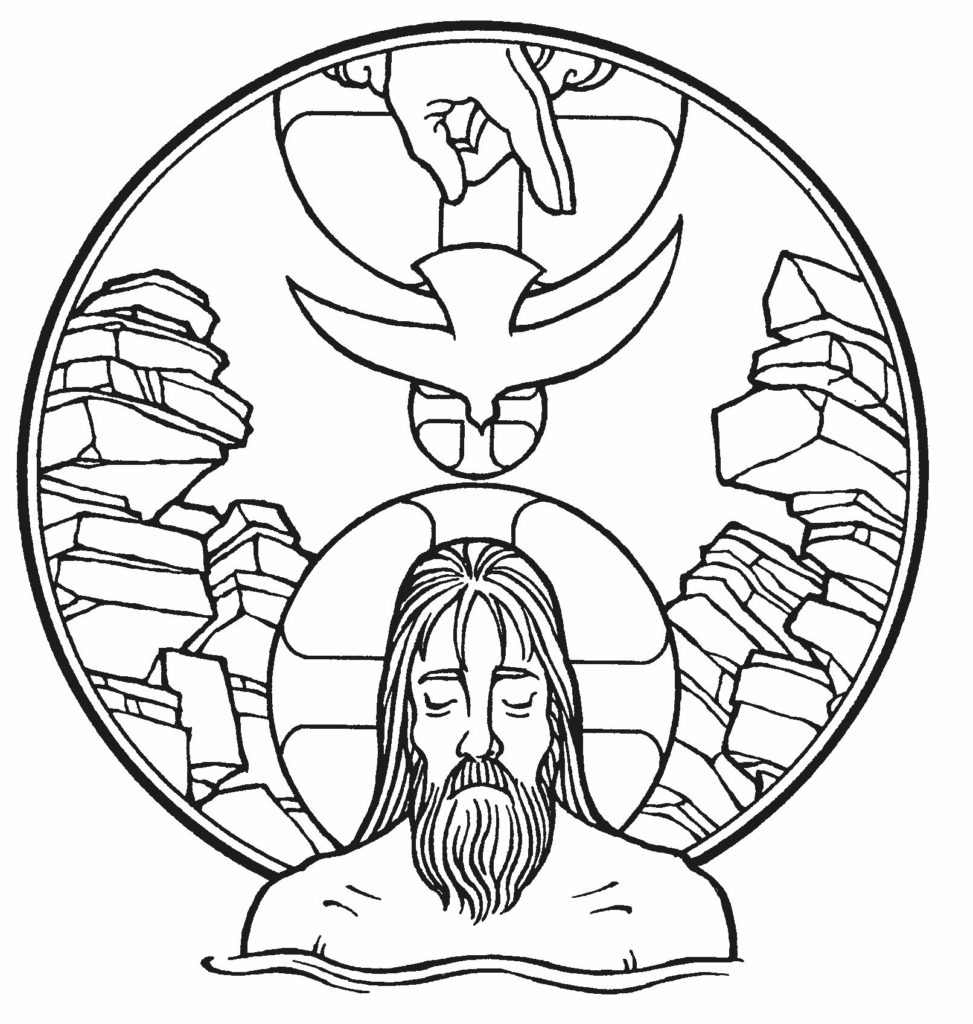 Feast of the Baptism of Our Lord

Every now and again I am asked about proving the existence of God.

And I’m willing to bet, so have you.

It’s easy to understand why this seems like the place to start a discussion.

But if we Christians believe what the Scriptures say as much as we claim,

We know that this might not be quiteas necessary as is commonly supposed.

The fact of God’s being, i.e. His existence and power, is already part of human nature.

For what can be known about God is plain to them, because God has shown it to them. Ever since the creation of the world His invisible nature, namely, His eternal power and deity, has been clearly perceived in the things that have been made.”Rom 1:19

All sorts of people have expressed that knowledge in all sorts of ways:

As “Natural Revelation;” or “Religious inclination;” and lately, as “The God hole.”

Because by itself, that bare knowledge that all men possess isn’t remarkably helpful.

It’s not filled out.

It leaves a host of questions;

Chief of which is “Whois this God?”

What is His attitude toward me?

If the invisible nature of God,

i.e. His eternal power and deity is partially revealed in something like the Sun,

Then it is easy to imagine that God remains at least that far away;

Out of reach and out of touch, an inapproachable and unquenchable Fire.

In some ways nature get’s it right in saying God is very much like the Sun.

You cannot reach out to God on your own; at least, not effectively.

Neither can you approach Him as you are. Really, He’s not even safe to look at.

And so, for all of that, you can’t really know what He’s like.

As for that question of God’s attitude, well…

If nature was the only thing that ever told you what God thought of you,

It stands to reason that He hates you;

Because in this world you will struggle and suffer and die.

Sun and Moon and stars and sea will pay no notice,

And the invisible God would not bat an invisible eyelash.

But those who perceive God only through nature do not know Him rightly;

At least, they do not know Him completely.

Their vision is darkened.

What they need is light and enlightenment.

Again, nature gets it partially right.

For He has given light and revealed what was hidden in darkness.

To Israel He gave a pillar of cloud by day and a fire by night.

To the shepherds He sent bright angels singing His glory.

To the Magi He gave a star that shined in the midst of darkness.

To all of you, to the entire world, He has sent His Christ – His Anointed One.

You always knew that God was not like you, and that is true as far as it goes.

But now you can be comforted that God is so very much like you.

You saw that Light at Christmas, of course.

But today that same Light shines even more brightly.

Today you see that God is not only one of you, but that He is with you.

More than that: today you know that God is, in fact, on your side.

That’s why Jesus is baptized.

The people have been dropping their sins off in the river Jordan;

Polluting the water, making it filthy and impure.

Not just because God told them to through His prophet, John,

But because Jesus isn’t going into the water to get clean.

Jesus enters into the water today to get dirty; He goes to become polluted.

He doesn’t get baptized to besaved, but rather tosave.

Jesus’ baptism in the Jordan does not heal Him; it infects Him.

He who knew no sin now bathes in it.

At the Jordan, Jesus is baptized into your death,

In the name of Adam and of Eve and of all their fallen children.

That is to say, in His baptism, Jesus takes on all you’ve got:

Your sin, your death, your hell – and He takes it all the way to His cross.

That is the Divine work He has come to do.

That is the ministry for which Holy Spirit comes down and anoints Him.

That is the cause of the Father’s beautiful and unqualified approval:

You are My beloved Son; with You I am well pleased.

Now you who God truly is. For He has been made Man.

He has met you in the water.

And so the last question answers itself:
What does God think of you?

He thinks the world of you.

When Jesus pulled all the sins out of the water, He cleaned it. He hallowed it.

When God’s eternal Word entered the Jordan He sanctified and instituted all waters to be a blessed flood and a lavish washing away of sin.

When the Word met the water of the font in your Baptism,

When you were baptized into Jesus’ death and resurrection,

When the Holy Spirit descended and the Father spoke, He told you:

“You are My beloved son; with you I am well pleased.”

At that moment you saw and knew who God is.

I know it seems like a lot to expect of a baby.

But a child doesn’t need to understand how light works to see the world it illuminates any more than he needs to understand biology to turn to his mother in hunger.

Christ is now the Light by which you see.

Christ is now the Life by which you live.

We were buried therefore with Him by baptism into death, in order that, just as Christ was raised from the dead by the glory of the Father, we too might walk in newness of life.Rom 6:4

That new life you live you live in Jesus.
What joy and privilege is yours!

It is so full and brilliant, it can almost only be comprehended by way of comparison.

There’s a beautiful moment near the end of The Lion, the Witch, and the Wardrobe.

In it, Aslan (the Christ figure in the story) is arranging the creatures for battle.

And out of nowhere he speaks to an ordinary old lion who was next to him, and says,

“When the battle begins, welions will be out in front.”

And this creature is overcome with joy and glee.

He runs away and begins whispering to all the other animals,

“Did you hear what he said? ‘We lions…WE LIONS!”

Friend, Christ numbers Himself as one of you.

Not only because He once lowered Himself,

But because He has raised and elevated our human nature.

Christ is with you.

In flesh and bone He has come to fight and bleed and die.

And so your victory is won in Him.

He has redeemed your lives and your deaths by joining you in them.

God is pleased with you for the sake of Christ, your Champion.

And so you may joyfully and confidently join Him in the fray now.

You are called to be there with Him, out in front.

You have no choice, really.

He has bound Himself to you.

Where He goes, you go.

And so when you go out into the world

As part of His gloriously redeemed creation,

You go shining brightly, in word and deed,

Lighting up the world and showing them who God is;

And what He thinks of them;

Because of what He has done for them.

To Christ be all the glory, now and forever, and to the ages of ages. Amen.