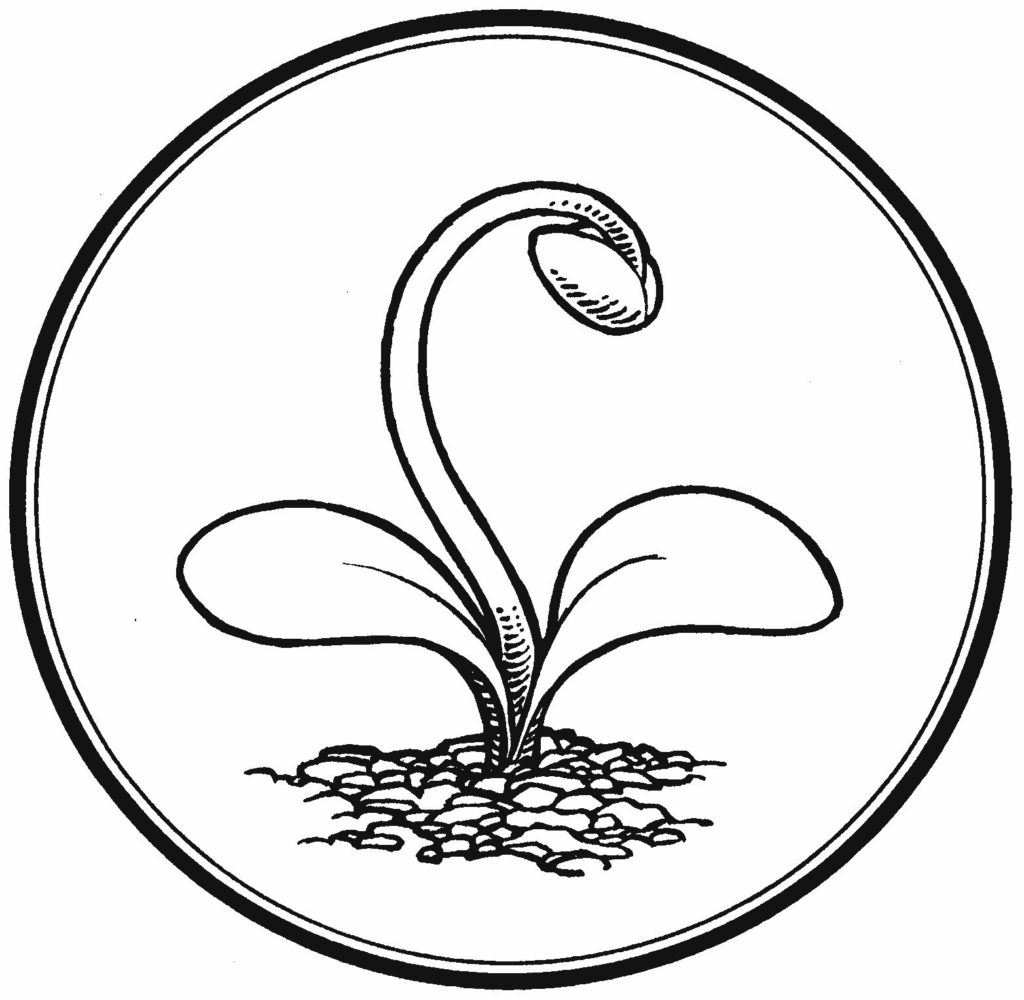 It was about six weeks ago, in one of the few warm days we had in May,

When I planted our vegetable garden.

It’s nothing big or complicated.

It was simple, but it was also a lot of work.

I tilled the earth.

I added compost and nutrients to the soil.

I calculated the hours of sunlight I could expect the plants to get,

And measured with my finger just the right depth they were to be set in the ground.

I pulled all the weeds out of the area so nothing would creep in.

I reinforced the stone around the garden bed.

I also wanted herbs, but I was exhausted.

So on the way into the house,

I casually tossed some seeds I had in a dixy cup into the dirt around the deck.

They were saved from the previous fall –

The remnants of a stalk of cilantro.

In all the weeks that followed I continued to work –

Just the normal stuff you do to a vegetable garden.

I pulled whatever weeds crept in.

I’ve been checking on this garden daily,

Because I want a harvest.

Or, maybe I just don’t want to buy overpriced vegetables.

I’m not sure myself.

And if we’re using Jesus’ way of speaking this morning,

Thatis what we think the Kingdom of God is like.

I tended to it daily.

I made sure the conditions were perfect.

Not just to be on guard against the satanic gopher who lives under the shed;

But because I want to watch my garden grow,

And because I want to enjoy the harvest.

And don’t you like to watch your garden grow, too?

Don’t you want to keep away all the threats against it?

Don’t you want to make sure it is getting enough light and water?

Don’t you want a beautiful harvest, too?

Maybe we can move past the parable for a moment.

You’re His disciples, after all.

Which means Jesus can explain everything to you.

The Kingdom of God is the Church.

And so, naturally, we would like to see that Kingdom grow, expand, and be fruitful.

And so we do lots of things to make it happen:

Parties on the lawn,

And on and on.

Or, put another way: everything I have been doing to my vegetable garden.

Because if this thing is going to grow,

If God’s Kingdom is going to grow,

At least, if it is going to grow in the way we expect,

We need to make sure the conditions are perfect.

I still don’t have any vegetables.

No carrots, no tomatoes, no onions, and no beets.

I’m not so sad about the beets.

It’s not just that it is too soon.

And they’re not going to.

I don’t know why, but nothing is growing, except the weeds I was sure I cleared out.

Those are doing great.

Especially after all the work I put in.

After all the sweat and the labor –

To see no result is painful.

And it hurts even worse in the Church –

Here, where the stakes are so much higher.

It hurts when we’ve done so much.

It hurts when you’ve done so much –

Everything you can think of to make God’s Kingdom grow.

And we still don’t get the results we expect –

But that’s not what the Kingdom of God is like at all.

The kingdom of God is as if a man should scatter seed on the ground. He sleeps and rises night and day, and the seed sprouts and grows;he knows not how. The earth produces by itself, first the blade, then the ear, then the full grain in the ear.But when the grain is ripe, at once he puts in the sickle, because the harvest has come.

A man scatters the seed on the ground,

And then he just goes to sleep.

He’s not worried or anxious.

The seed sprouts and grows and he has no idea how or why.

He can’t control it.

He can’t make it better.

By God’s power, the earth produces seemingly on its own.

God uses you to plant the seed of His Word.

But it is He alone who provides the growth.

It’s just as you heard in the OT reading this morning:

Thus says the Lord God: “I myself will take a sprig from the lofty top of the cedar and will set it out. Iwill break off from the topmost of its young twigs a tender one, and I myself will plant it on a high and lofty mountain. On the mountain height of Israel will I plant it, that it may bear branches and produce fruit and become a noble cedar. And under it will dwell every kind of bird; in the shade of its branches birds of every sort will nest. And all the trees of the field shall know that I am the Lord; I bring low the high tree, and make high the low tree, dry up the green tree, and make the dry tree flourish. I am the Lord; I have spoken, and I will do it.”

How will He do it?

At the Annunciation, the Word was spoken to Mary.

The Seed was planted.

And so the Kingdom of God began to grown inside her womb.

Smaller than a mustard seed He began.

Still young and tender, 33 years on,

The root of Jesse’s tree, Jesus was planted on a high and lofty mountain,

On the mountain height of Israel – a hill outside Jerusalem.

He was crucified, died, and was buried.

He rose and sprouted up like a noble cedar;

And now He bears branches and produces much fruit;

And birds of every sort nest in the shadow of Him and His cross.

You rest in the shadow of Him and His cross,

And enjoy the fruit of a garden you did not plant,

And citizenship in a Kingdom you did not build.

With what shall we compare the Kingdom of God?

Or what parable shall we use for it?

It’s more like those seeds I cast so casually into the dirt around the deck.

I cast them to the ground and practically forgot about them.

I went to sleep and I arose. Day after day.

No anxiety, no worry.

The earth produced by itself.

And we have more than we need, so feel free to take some home.

Or it’s like all the times you hear someone tell you the story of how they got here,

i.e. into the Church,

And it makes no practical sense whatsoever.

Certainly nothing you’d use as a church-growth strategy.

The Kingdom of God is like how late in Luther’s life,

He was asked to reflect on the Reformation, and how it had been such a success.

I simply taught, preached, and wrote God’s Word; otherwise I did nothing.  And then, while I slept, or drank Wittenberg beer with my [friends, Philip and Amsdorf], the Word so greatly weakened the papacy that never a prince or emperor did such damage to it.  I did nothing.  The Word did it all.

He alone will grow His Kingdom, In His time, in His way, and by His grace.