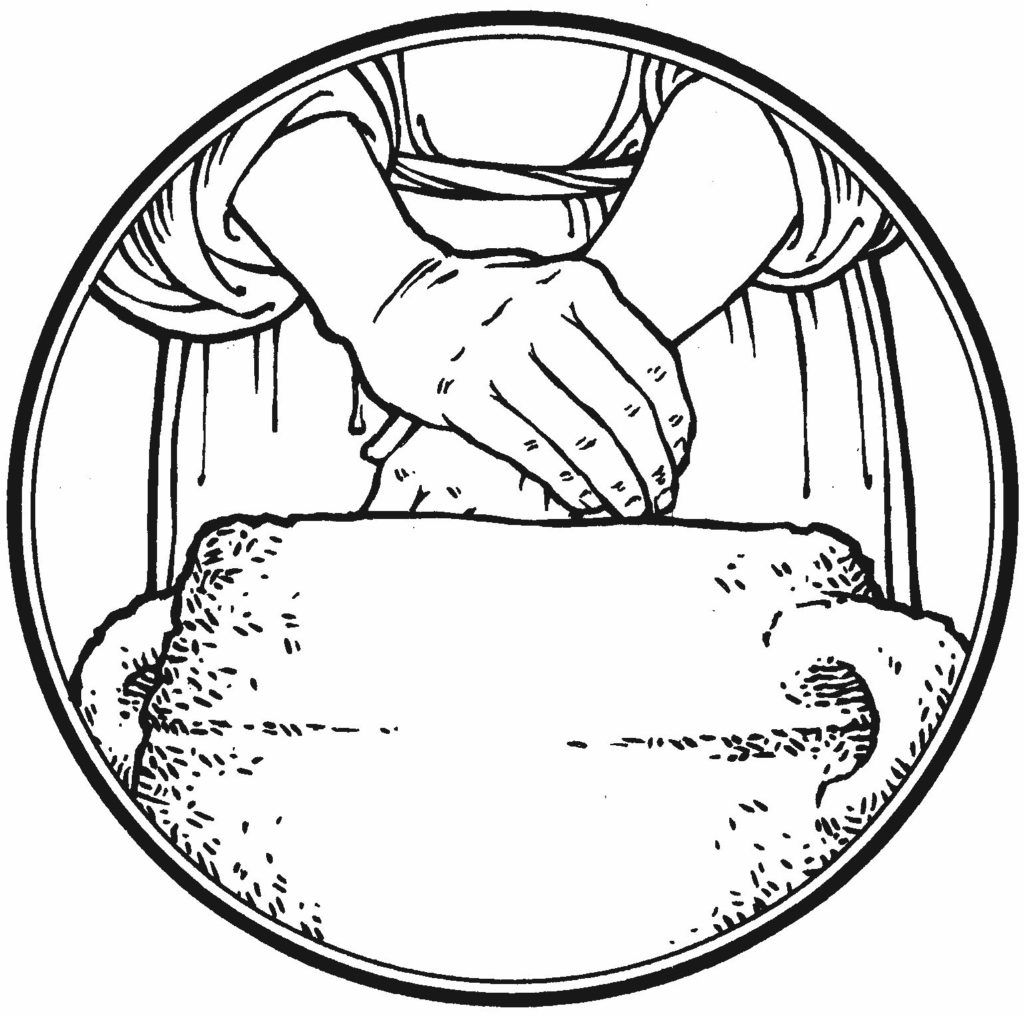 14th Sunday after Pentecost | Jesus and the Traditions of the Elders | Mk 7:1-13

In the same year that God freed His people from slavery in Egypt,

He instructed them, in overwhelming detail, to build a Tabernacle – a sanctuary.

This would be a place for the LORD to dwell with them visibly.

And so, it would be a place of worship.

The Tabernacle included a grand courtyard for the people,

But the Tent of Meeting was a place meant only for Moses and the priests.

That’s where the Ark of the Covenant was, along with the Bread of the Presence;

But even for them, for the few allowed to enter, there was another requirement:

They had to wash their hands and feet.

If they didn’t – if they went forward to meet God unclean – they died.

And so, between the courtyard’s altar and the Tent of Meeting,

Now, why does this matter?

In our Gospel text for this morning, St. Mark describes some odd behavior.

One of them included washing their hands – which isn’t weird at all,

Except that they weren’t really worried about their hands being dirty;

This was a ritual washing.

And part of the idea was to show who is holy and who is not.

But it didn’t stop there.

They also washed the cups, the pots, the copper/bronze vessels, and even the couch.

The Greek in which Mark writes actually says: “They baptized” all these things.

What bugs the Pharisees, and what prompts their question,

Is that Jesus’ disciples don’t.

Jesus’ disciples don’t follow the tradition of the elders…for one big reason.

The Pharisees think that in these rituals they are making themselves righteous.

Many years before, God gave a simple command to the priests:

Wash in the bronze basin before you enter the Tent of Meeting, the Holy Places.

But God did not command this.

This is their attempt to be holier than everyone else by doing more than God said.

And if you don’t play along, you open yourself up to ridicule.

They started by taking a good thing from God, and distorting it.

They made it about them.

First, they insisted that everyone wash, not just the priests.

Next, it isn’t enough to wash yourself, but everything you touch.

Finally, it’s no longer connected to an encounter with God,

But every time you come back from the store to eat.

They think that if they can go above and beyond,

And do more than the Law requires, that God will be impressed with them.

Through the mouth of His prophet Isaiah,

When the traditions of men take the place of God’s commandments.

As an example, Jesus notes how the Pharisees guilt men into giving special offerings, Above and beyond their tithes.

Those men need to be caring for their parents who can no longer work.

This is part of what it means to honor your father and your mother.

But, the Pharisees think it is more honorable to designate that money as “Corban,”

As “given to God” for a special offering.

And so, in doing what the Pharisees ask, the man breaks the Fourth Commandment.

Thus, they make void, they neglect the Word of God by their manmade traditions.

It’s textbook pietism and legalism, and it is incredibly dangerous.

Trying to be holier than God always ends up in disaster.

Given the revelations of the last couples weeks,

It’s impossible to hear this account without thinking of the tragedies in the RCC.

He says that marriage even helps prevent us from falling into some sins (1 Cor 7:9).

And yet, in the face of all that, if you want to be a priest you have to disregard that.

You have to remain unmarried.

Of course, in a world broken by sin,

But this is clearly the fruit of manmade traditions that fly in the face of God’s design.

And that aspect of it is really the problem.

Jesus doesn’t out ’n’ out despise traditions or ceremonies – not even manmade ones.

What gets Jesus very cranky is when those traditions, those manmade laws,

Get in the way of His Law.

It’s easy to see how this is a problem for our brothers and sisters in Rome.

But what about for us?

Where have we allowed our own traditions to obscure God’s Word,

Both His Law & His Gospel?

Like the Pharisees, we’ve become experts in impression management.

We’ve managed to convince folks that we really are as holy as God requires.

We used to do it by outlawing dancing and life insurance.

But, aside from being unbiblical,

All that turned out to be impractical very difficult to keep up with.

But, relatively recently, impression management has become much easier.

Now, you can go online and literally createyour profile.

There you can tell people exactly what they should know about you,

And hide what they shouldn’t know about you.

And so the Church has created a false profile:

That of a Hospital without sick people;

A dwelling place for a God whose people barely need Him.

People see that counterfeit holiness, and it scares them.

Even when they know their sin and their need,

The Church only seems to be full of people who are well.

As a result, people in need of grace and mercy are too afraid to enter, lest they die.

You’ve heard that put this way:

“I can’t go to a church. It would catch fire and collapse on me.”

On the one hand, those people have a sense of God’s Law and its demands;

But they are utterly ignorant to God’s grace in Christ.

But all of that impression management is as superficial as the screen on your laptop.

Pietism has affected us as a whole Church.

And, as a result, some of our traditions,

Begun with the best and most pious intentions,

Have become obstacles to grace.

I know children who are keenly aware of their sin,

And who desire the forgiveness given them in the Lord’s Supper,

But whose parents and pastors won’t even consider letting them receive that gift,

Until they are confirmed, according to the traditions of their elders.

Once it got so bad that the Lutherans in Wittenberg abolished the practice;

But ended up bringing it back in the age of pietism because they felt they needed a way to prove that they had genuine faith.

What we have now is better.

It pleases God to teach our youth His Word and help them grow in faith;

To teach them the simple and sound doctrine found in the Small Catechism,

Of which we sang a few minutes ago

But the Lord’s Supper cannot be the carrot on the end of a stick.

To turn it into something we earn is to deny the Gospel.

That’s what the Pharisees did.

The Pharisees looked back to the Exodus at the command for the priests to wash,

And imagined that God was establishing a set of rules they could use to please Him.

What they could not see is that God didn’t give the commandment for Himself,

He gave it for them.

God attached a promise to that washing to protect them.

God commanded it, and God promised to purify them in it.

Through that washing, in that water, God saved them from death –

Not a strange idea for a people who’d just been delivered through the Red Sea.

We’re not different from them.

We’re not smarter or better observers of the Law.

Much of the time we fall on the other side of the horse,

But that’s a different sermon.

There is a Pharisee in you who wants to please God with your own works.

There’s a Pharisee in you who thinks he can impress God with his piety.

That is what Jesus calls vain worship.

True worship is receiving God’s costly grace as an undeserved gift to you.

And it is costly.

Forgiveness of sins, live and salvation,

That costs Jesus His life.

The water that fills the baptismal font flows from His pierced side.

Likewise, the blood that fills our chalice.

All of this is here now for you to taste and touch and see.

That was great joy of the Tabernacle: that that God dwelled with them visibly.

How much more now for the Church?

God has come to dwell among us visibly:

In the manger and on the cross;

In His Word where it meets water and bread and wine, making them more.

In that font, in that Baptism –

You were made clean;

And you were saved –

Just as He promised.

Who approached God in His Holy place as men made clean,

So now do you.

As a reminder of that I offer you an entirely manmade tradition:

As you come up today,

As you enter into the Holy Place,

Consider touching the water in the baptismal font.

Not to be cleaned off again –

You’re already clean because Jesus has cleansed you;

But as a reminder of the faith, the life, and repentance God has worked in you;

By which you can come now to eat with clean hands, clean hearts, clean everything.